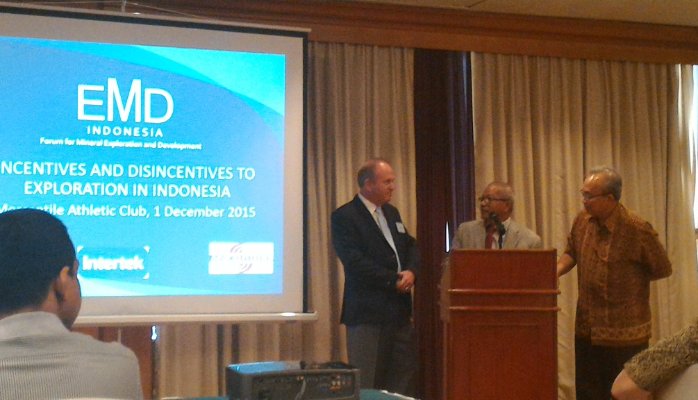 EMDI seminar on “Incentives & disincentives to exploration in Indonesia” Jakarta 1 December 2015. The seminar was attended by about 50 people, many of whom are long term industry players, plus a welcome few new people interests to learn about the Indonesian exploration industry.

The following are personal notes taken without recorder, wherein I apologize for any mistakes or omissions. Photographs of most of the presented slides were taken.

Lobo Introduced guest Dr Andang Bactiar – head National Energy Council (NEC), which is a group of about 46 professionals representing stakeholdersfrom the government, industry and academia that provides advice to the Minister. He was chairman of Indonesian Association of Geologists (IAG) from 2000 – 2005. This NEC is traditionally only for the oil & gas / energy industry, but will be expanded to include geothermal & minerals next year. Andang has no experience or significant contacts in the mineral exploration sector, and thus he will be looking for input from EMDI.

4. Ir TinoArdhyanto (new chairman of PERHAPI). He is a miner & geologist with past experience in Freeport, BP (oil & gas), Pinang Coal and then to Indika Energy and now running the coal transportation sector.

5. Peter Fanning[peter.fanning@hhrlawyers.com +6281 186 2094] – “The Challenge to Investors, A perspective on Indonesia’s Investment Climate”. Presentation with slides. This presentation is a list of legal aspects related to the Indonesian mining sector.

RINJANI – From evolution to geopark.

RINJANI – From evolution to geopark. This 200-page soft cover booklet is written in Indonesian by .... Read More